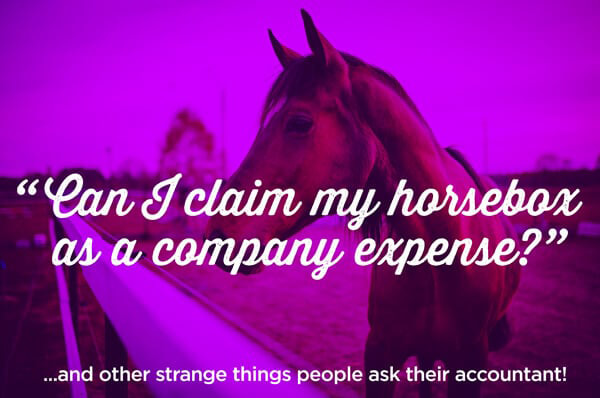 Who says accountancy is dull? It may seem like numbers and spreadsheets (shameless plug: at My Accountant Friend, there are no spreadsheets), but there are also a lot of eccentrics with – shall we say – creative accounting ideas.

Not that any of the people we work with these days have such strange notions, but over the years we’ve encountered our fair share of weird and wonderful stories.

We thought it might be interesting to share some of the strangest accounting questions we’ve ever heard, so that you can get a better idea of what is and isn’t ‘normal’ in our world, and see that the question you’re dying to ask may not be as stupid as you think. Don’t worry – all names and businesses have been changed to protect the (not so) innocent.

In this week’s Off the Record, we asked Kenny Fitzgerald and Iain Morrison, MAF men who have seen and heard it all before.

So, Kenny, what is the strangest thing you’ve been asked during your time as an accountant?

Kenny Fitzgerald: Where to start? The strangest questions usually begin with ‘what expenses can I claim?’ and then spiral from there.

What is the weirdest thing you’ve seen put through as a company expense?

Which was weird because…

KF: …because the company didn’t own any horses. The guy was an IT contractor. Picture those guys at work who spend all of their time fixing computers and sorting out servers, and now imagine them doing it on horseback. The strangest thing was that he got upset that I wouldn’t believe it was a business expense.

Yeah. ‘That horse you’re riding… have you tried turning it off and on again?’

KF: Exactly. I’m not saying the two worlds are mutually exclusive, but it took some stretch of the imagination. Those people down at HMRC – they’re not as stupid as most of you would like to think.

We had no idea that IT contractors could be so wily!

KF: You can’t go tarring them all with the same brush… although, I did once have to talk to another IT contractor about trying to squeeze through a Sunseeker yacht.

KF: Yeah, a £1.4 million Sunseeker yacht. Being able to sail into the office is a valuable part of an IT contractor’s business armory. The amazing thing is that people don’t tend to tell us about these things until the very last minute. ‘A £280,000 VAT return? Why would my accountant need to know about that?’ That’s just an example of someone thinking they know best, whereas – had we known about it sooner – we could’ve made suggestions for how to approach it in a more tax efficient way.

Iain Morrison: I knew a guy once who tried to claim Jaffa Cakes and lottery tickets.

IM: Well, he managed to put his dog through as a security expense, and the lottery tickets were classed as ‘charity’, so this guy was the Picasso of the creative accountancy world. He capitalised the dog over five years!

Want to know more about what you can and can’t claim as expenses? You can chat with Kenny and Iain directly at My Accountant Friend and find out more about how on-demand accounting works – marrying tech and traditional skills so that you get the apps and the personal service all in one affordable package.

« The (Summer) stability budget: what’s that all about?
Do you want to be the last one holding the umbrella? »